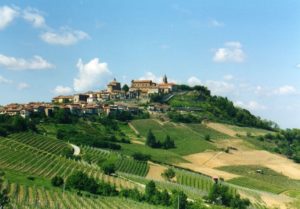 La Morra and the surrounding towns with their medieval rich of history castles, old churches and ethnic museums are real treasure for art and culture’ admires.

La Morra is one of the most panoramic points in the lower Langhe region of Barolo. Like the majority of the neighboring towns, it stands on the summit of a hill, a location chosen for safety reasons. The first residential settlement could be found in what is presently the hamlet of Annunziata, but during the medieval period (XII century) the settlement was transferred to top of the hill, where it was rebuilt with the protection of a high boundary wall. The name La Morra comes from Loci Murrae, which means sheep enclosure, and in fact it’s presumed that the Benedictine Friars of Annunziata pastured their flocks on these lands. The presence of the Benedictines in the Langhe was widespread at that time. Then there began a succession of difficult periods, the Langhe was shaken by war, pestilence and the devastating earthquake of 1222. These catastrophes gave way to religious fervor, which only increased by the arrival of Saint Francis of Assisi in 1223, who preached in these lands. Important evidence of the Benedictines can be found in Annunziata, in its convent from the XIII century, a monument of notable historical and artistic interest. 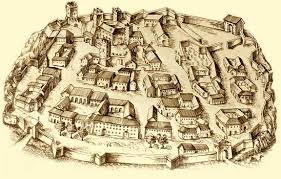 The founding of La Morra can be traced back to between the XII and XIII centuries. In 1342 the town became the domain of the Falletti family, who ruled over these lands for several centuries. In Piazza Castello (Castle Square) at one time it was dominated by an imposing castle, owned by the Falletti (one of the most important noble families of the area). Later in 1544 (during the French Spanish war of 1537-1559) the Commissary to the King of France gave orders to have it destroyed. In 1631, after being dominated by France and Spain, La Morra fell under the rule of the House of Savoy.On the ruins of the castle around 1710, the present bell-tower was built, and has recently been restored. The rest of the remains were leveled in 1834, when the Falletti family allowed the town hall to reorganize the plateau into a public square.

Symbol of La Morra, the Monument to the vinedressers of Italy, a work in bronze by sculptor A. Munciguerra. It was created in 1972 to honor all the farmers whose difficult job it is to work in the vineyards, the marble bust of Giuseppe Gabetti (Torino 1796, La Morra 1862) who lived the last years of his life in La Morra. He was the composer of the Royal March, which became the Italian national anthem from 1861 to 1946 but you can’t speak about this square without mentioning another symbol which distinguishes and synthesizes the two vocations of the town, the beauty of the landscape and the wine/gastronomy eith Cantina Comunale and many restaurants guardian of the traditional Langa cuisine. 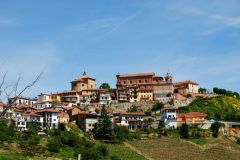 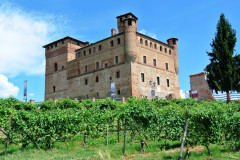 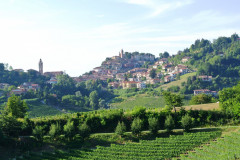 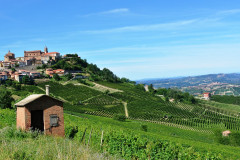 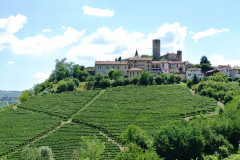 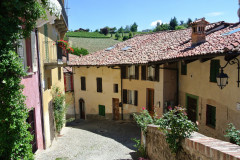